It’s nearly dinnertime at the refugee camp at Port Piraeus and everyone seems to be pretty hungry. It’s Ramadan and most people here are observing the Muslim fast, which means no eating til sumset. One of the volunteers here told me that when the holy month started, the Greek Navy (which supplies the bulk of the food) only brought in half the rations. No lunch, was their reasoning. The volunteers had to explain that Ramadan is about fasting, not starving.

Especially ravenous is this one group of kids. An old Greek man with a long beard walks by like a wizened Pied Piper, trailing a line of screaming children. He’s dragging a buggy stacked with paper sacks and when he stops and turns to his followers, he unveils, religiously, a sesame bagel. The kids go nuts.

I’m standing in the shade watching and the guy next to me, bright red shirt, buzzed hair, wearing headphones — someone you might meet in the thick streets of New York — he smiles at me.

“Do you speak English?” I ask.

“They’re all about freedom.” 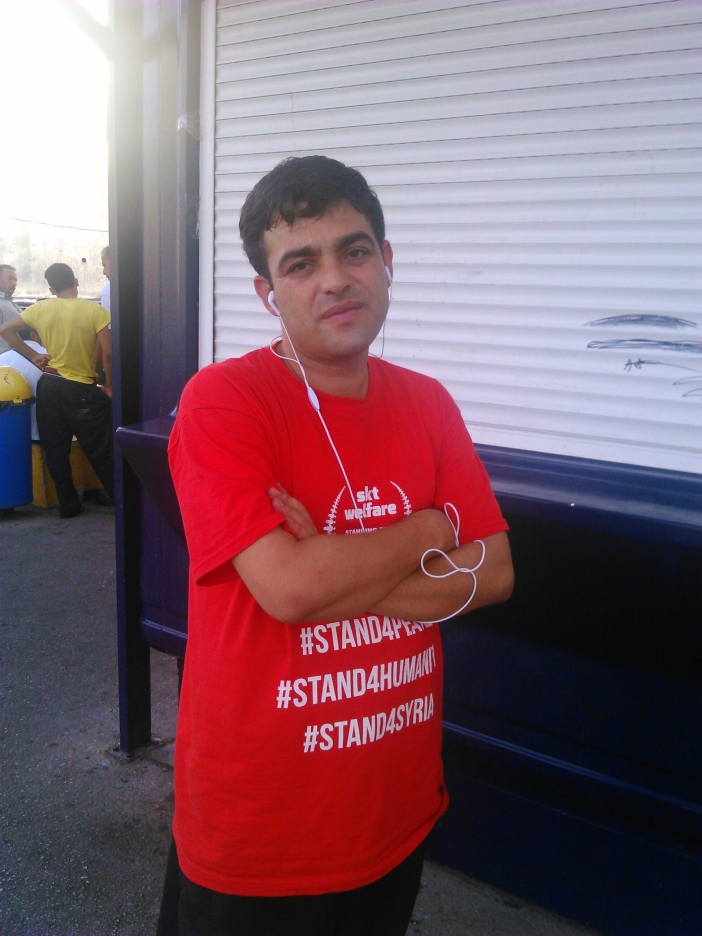 His name is Nayaz. It turns out he worked for the US Army in Afghanistan as a cable operator. When he started receiving text messages from the Taliban threatening to kill him because he was working for the enemy, he thought it was just someone messing with him. Then five men came to his house at four in the morning and killed his brother.

He shows me a photo on his phone of his brother, lying in bed, a swollen face, with a sort of powder between his eyes, which are shut fast.

“They shot him here,” he says, hovering his finger over his brother’s brow, exactly between the eyes. “We look the same. They thought they killed me.”

So he went to Pakistan, but couldn’t escape the threats. Then he fled to Iran. That wasn’t working for him either. So he went to Turkey. Then paid a smuggler 3,000 euros to give him a place in a boat to the Greek island of Lesvos. He arrived safely on March 17.

On March 18, the European Union passed a deal with Turkey stating “All new irregular migrants crossing from Turkey to the Greek islands as of 20 March 2016 will be returned to Turkey.” Nayaz was lucky.

He was lucky to be able to stay in Greece, one country closer to Switzerland, where he hopes to settle finally. But not lucky enough to have arrived before Macedonia closed its border with Greece on March 9.

After arriving on Lesvos and getting his stamped document (which allowed him to live one month in a Greek refugee camp), he took a ferry provided by the UNHCR to Port Piraeus, Greece, where we’re standing now. He spent a night or two here and then headed North, toward Macedonia. He and his traveling companions actually made it accross the border and walked for a full day before being caught by the police and sent back to Greece.

So now he’s here, biding time on an expired pass that (thanks to lax police security) is only good for letting him go out of the camp every now and then, a camp that is likely to be closed sooner or later by the government. Then what? He’s overstayed his papers, can he get new ones? He doesn’t know. If he gets caught outside of the camp without the proper documents, he would go to jail.

“I don’t want to go to jail,” he tells me. “This is the first time in my life I break the law — to leave my country.”

But he also doesn’t want to go to an official camp because there, he fears, he would have to apply for asylum and drop his dreams of Switzerland.

So he’s waiting. If his family can put together 5,000 euros, he could pay a smuggler to get him to Switzerland. There aren’t any smugglers in the camp, but he has a couple of phone numbers he can call. And if Macedonia re-opens it’s border, he would go right away.

So he’s waiting for that and also for the sun to go down so that he can eat some food.

One thought on “Waiting for the Sun to Set”