The tent city at the harbour of Piraeus, Greece, is an unofficial refugee camp, constantly under threat of evacuation, where over 2,000 refugees from Syria and Afghanistan have been residing, many of them without papers, for several months. A team of dedicated — and overtaxed — volunteers from a few small NGOs, as well as some “free agents,” manage the residents’ health, safety, hygiene, and even recreation. Because they are an unofficial camp, they get little more than emergency supplies from the UN refugee agency. Most of what’s done at the camp is an improvisation and a cooperation between the volunteers and the residents. There’s almost always a feeling of conflict in the air, but also of humor. (Some names of people have been changed.)

It’s the morning after the night I spent at the port. Samrend is standing over me smoking with his foot resting on the concrete barrier I’m sitting on. His tan is deep, his hair sandy brown, his golden Aviator shades reflecting my own skinny figure back at me. He looks like a Kurdish Abercrombie model who’s been to war. In fact, he has been to war. He fought ISIS with the Iraqi military last year.

Everyone else is hiding in the shade except us two.

“We have a lot volunteers. A lot good. One crazy.” He starts laughing at his joke and decides to repeat it. “One crazy. You know who.”

And indeed I do. Shane, the head guy around here — appointed head guy because he knows the owner of the property that the camp is on, and was given the keys to everything — is the very definition of overworked. I had seen him the night before, dripping sweat, nearly confused in his exhaustion, tell a resident to fuck off because the young Syrian guy was complaining that the waterbottle he’d just gotten wasn’t cold. It was one of those situations where if I were to tell the long version of it, you could kind of see both sides. But this all happened in Shane’s trailor-office while he was talking to me, a journalist. I don’t imagine he cares how that looked. I think he really sees himself as the keeper of the refugees. And from time to time he kind of loses it. In that regard, some of the more chilled out residents have become his keeper.

I escaped the boiling trailor and found a block to sit on and eat my dinner. The sun had set, the moon appeared tiny over the giant cruise ship that had docked here the day before. In front of me, between the shower trailor and a defunct ticket house, a group of Afghani boys started a pickup game of volleyball.

Keegan came and sat by me as I watched the game. She was one of the two Montana girls, had come to volunteer on a whim because she had inherited a bit of money from her grandfather and so had the resources to last a month without income. The bulk of what she learned about the refugee crisis she’d read on the plane on the way over.

Soon we were flocked by boys who wanted to practice their English with Keegan, ask Keegan questions, teach Keegan Farsi.

It wasn’t long before she was called away on business and I walked over to the edge of the port with Ahmad, a 22 year old from Afghanistan who had been showing me Facebook memes about the epic Afghanistan-Pakistan cricket rivalry. “Who your favorite bowler?” he had asked me. I’d almost said Jeffrey Lebowski. “I know nothing about cricket, I’m afraid.”

At the dock, a few Syrian guys were diving into the water while the Afghani guys were sitting off to the side and listening to music. The two groups don’t mingle much, not just because they don’t speak the same language, but also because they don’t get along. They stand in separate lines to collect their food boxes in the evening, which annoys the volunteers to no end.

But tonight, after a morbidly hot day, one of the Afghani boys couldn’t resist and he stripped down, getting ready to jump in. One of the Syrians grabbed him, laughing, and made like he was going to throw him in the water, and you could see the captive was pissed. A couple of his friends got up to defend him and I thought there was going to be a fight, but at the last second the Syrian guy released him, and he jumped in with his dignity in full form.

I thought about showing off my backflip, but when I saw the oil in the water I suddenly remembered to maintain a certain sense if journalistic humility.

Fatigue rolled over me, mixed with the sour feeling of having nowhere to sleep. The volunteer Michael had told me I could sleep in the Stonehouse, the section of the warehouse saved for the volunteers. Michael always seems to know what’s going on, who is where, what needs to be done. It’s the impression he gives off. He’s a tall guy from a Chinese background who lives in Manchester. He has a natural calmness and dedication. There’s probably some quiet volunteers or residents who have as good a grasp on things but don’t walk so tall.

When I had mentioned my overnight arrangements to Shane, however, he’d used his veto, it was already too full. Now it was late and I’d forgotten to clear that issue up.

I looked around and didn’t see a volunteer. The door to the Stonehouse was locked. It was a joke among the refugees to bang on the door and yell “Open the borders!” But you couldn’t use that trick after midnight, was my sense. I looked at my watch: almost 1 a.m. I decided I would just sit on a block and think about it, wait until I was tired enough to force a solution, maybe lay my sleeping bag next to a tent or something. So I plopped down in front of the enduring volleyball game and watched. The game had grown more violent. Stronger spikes, arms swinging like cricket bats. There was no net, just an imaginary boundary. My mind shut off and I watched.

It was in this state that someone found me an hour later. “Do you have place to sleep?” asked a man in his late thirties with a knowing smile, another guy next to him.

“My friend ask ‘Why he sit so late and just looking, looking?'” The both had a good laugh and led me to an empty tent by the road that passed in front of the parking lot.

The tent had been neurotically set, a felt blanket spread to the very edges of the floor and no further, the way it’s done in hotel beds, mysteriously taut. There wasn’t a cigarette burn, not a single crumb or an ant to eat it. I took my shoes off and was about to bring them in with me. “Ah, please,” said my host delicately. He took the shoes and placed them in a box with the other shoes, then laid a towel over them. He said good night.

Remembering how thirsty I was, I went out again in flip-flops to fill my waterbottle before hitting the sack, and I saw Keegan sitting on a block, smoking a cigarette.

“No, I couldn’t sleep. Had an asthma attack and I don’t have an inhaler.”

She took another small drag and flicked the ash on the pavement. It wasn’t a mystery why she always seemed to be surrounded by the young people at the camp.

“Well, I hope you feel better.”

I slipped back into my accomodations and began to find the sleep in me when a figure appeared at the door. It was my host again, this time with a light sheet, which he laid over my legs.

A minute later he came back with two packaged croissants and two navy-issue orange-flavor drink boxes.

Every minute after that I expected another visit. I couldn’t doze. The sound of trucks climbing the nearby highway ramp, distant sirens, the shouts from the eternal volleyball game. Then I passed out. 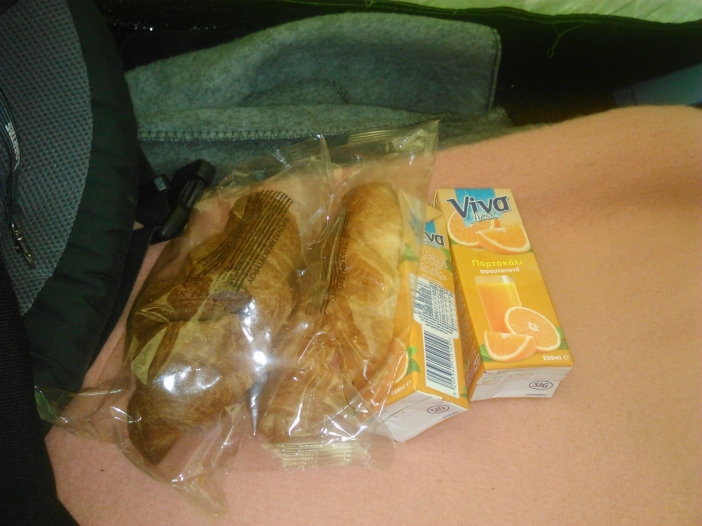 The first person I saw in the morning was Samrend. He was on his phone and he looked up when he saw me and greeted me in his perpetually hoarse voice. A little girl walked up and took my hand. We walked around for a little bit until she found another hand to hold. She walked away and never looked back.

Then I saw Michael.

“How was dinner last night?” I asked. The Drop in the Ocean volunteers had all gone out together the night before. Going out means, for the volunteers, going into the tiny town of Piraeus, right next to the port.

“Oh, it was wonderful.” He spoke with a sigh.

“Yeah, I didn’t get much sleep last night.”

I asked for the story.

A couple of kids were sick, throwing up in the middle of the night.

“We had to wake Shane up at five, and he drove the kids to the hospital.”

I noticed Shane had rolled up on the premises again. I wanted to chat with him one more time before I left for good, but I was always one step behind him, always second in line to ask him a question. He finally jumped in his sulking grey minivan and drove off toward the camp further down the port.