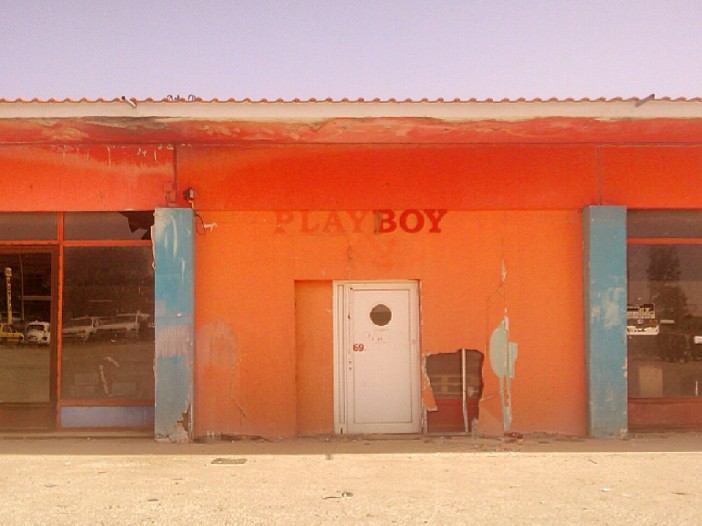 Polykastro, a Greek town near the Macedonian border with about 7,000 residents was the link to civilization for over 10,000 refugees holed up in massive unofficial camps in the area (Idomeni is 15 minutes away) before they were cleared in the last month. And the town was also a link to civilization for as many as 1,000 volunteers who had come in from all over the world to help mitigate a crisis that all the countries of the United Nations have been somehow unable to deal with. Now that the unofficial camps have been closed, the number of refugees in the area has dwindled and so has the number of volunteers. But Polykastro is a different place now. This is Part Three of the story. For Part One, click here. For Part Two, click here.

This is not a portrait of a quiet Christian town without a history, suddenly tossed into the stream of the real by current events. Every town has a history, and if it doesn’t then it will soon.

Polykastro is indeed quaint, it’s monuments sit in empty parks, grass crawling up their legs. There’s a football field and a dozen ice cream parlors. Most people you’ll meet on the street are ethnic Greeks, if that means anything. But in 1900, this was part of the Ottoman Empire, there were more Muslim Turks than Christian Greeks, and the Muslims were the ruling class. Then they fought some local battles, then the Empire collapsed.

Bit this is a portrait of a small, shrinking town, suddenly changed again, if only temporarily, by the massive refugee camps — Idomeni and Nea Kavala — that were pitched in fields nearby.

I met this watermelon salesman inside the Park Hotel, which has become a hangout, meeting space, phone-charging hub, and residence for refugees and volunteers. This guy is 82 years old, and the first time I saw him he was getting a rise out of showing me how this 13 year old boy from Syria could smoke a cigarette like an adult. He spoke to me in German and to the kid in Turkish, the explanation being that he spent 32 years in a German Ruhrgebiet coal mine working with Turkish people. In the end, he came back home to old Polykastro. 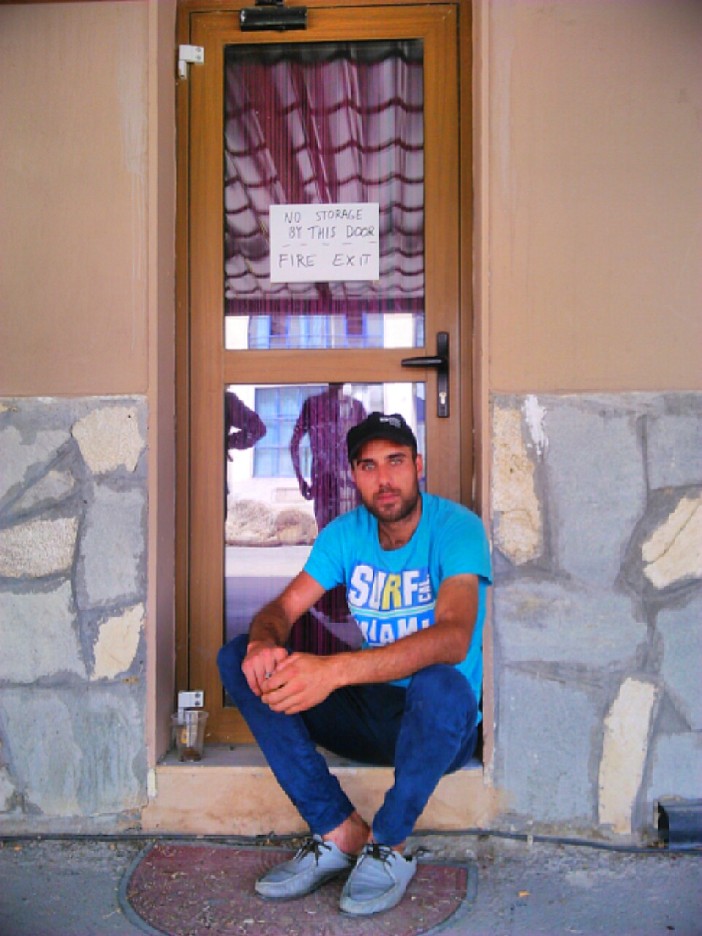 Aodai (above) was a carpenter and floorer in Syria. He told me, mostly through the Google voice translate app, but also through pantomime, that three things are driving him crazy: the heat, the mosquitos, and not having any work to do. In this photo, he’s sitting in the shade on the side of the Park Hotel.

Asylum seekers like Aodai are free to go into Polykastro, they just need to bring some documents with them. Like this camp “entry pass”:

And this temporary residence permit from the UN, which most of them received on the Island of Lesvos:

Of course, if you have one, you should bring your passport.

Abdoul, whose documents are pictured above, told me about their last night out in Polykastro. Some drunk Greek guy started yelling some racist stuff at them, and then attacked Abdoul’s friend Ali. Some cops were standing around, picking their nails. When they fight was broken up, the Syrian guys went over to the cops.

“Didn’t you see that?” Abdoul asked. “That guy tried to fight us.”

The cops thought they were being nice by not arresting the refugees.

“Fuck you we’re fine!” said Abdoul. “Is it not a crime in Greece to attack someone?”

A handful of the volunteers who hang out at the Park Hotel are part of the warehouse team. They sort, store, and distribute donations coming in from all over Europe. But because the camp at Idomeni is gone, they are moving their operation south to Thessaloniki, where they’ll be closer to the remaining camps.

One thing to add: “Stairway to Heaven” is playing in the background of this last photo.

The warehouse is just on the edge of town. Just a little further in, you find Polykastro’s frayed edges, abandoned buildings that didn’t quite incorporate into the body of the city. 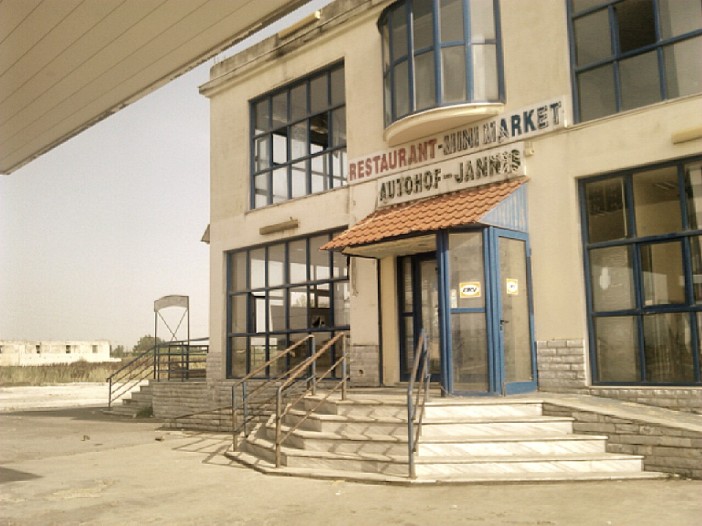 Through an alley, however, I glimpsed a bit of Elysian Greece.

An of course, the town has residents. This is Stefanos (pictured right), owner of an auto shop.

I asked him what he thought about the sudden appearance of so many migrants and aid workers in his town. This is how he explained it:

Basically, there were way more aid workers than I had thought, at least according to Stefanos. I had said 300. He said there are 300 now, but at the height of things, there were somewhere in between 800 and 1,000. He also thought there had been 25,000 refugees in the area, and was glad that they would be moved to near Thessaloniki, Greece’s second city, where they wouldn’t dwarf the local population. Every time he wrote something and then underlined it, he would look up at me, pause for effect, and say, “Biiiig problem.”

Then he tried to explain the history of the refugee crisis to me using the same technique:

He leaned back in his chair.

When Eva, a volunteer at the warehouse was living here in Polykastro, the grocery store she was shopping at started carrying soymilk. She, a vegetarian-almost-vegan, can’t prove it was the volunteers that opened this soy market. But she is almost certain the milk-alternative won’t sell as fast now that the volunteers are headed elsewhere.