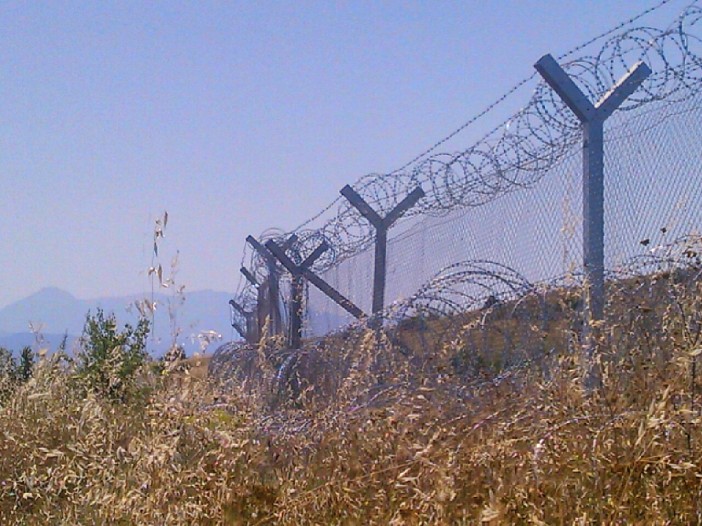 Since June 14, I’ve been traveling from the south coast of Greece toward Berlin, writing about migrants and migration facilitators — the people who help migrants get where they want to go.

My original idea was just to post this photo (above) of the Greek-Macedonian border near Idomeni, and that was going to be my entry on Macedonia. It was going to be a statement about what this little country represents to undocumented people who want to pass through.

But then I thought I would add some facts to make the image hit home. On March 9, the former Yugoslav republic of Macedonia closed it’s borders to refugees, from then on out hunting down tresspassers throughout the entire country and forcing them back to the border. They beat people, kick them, break their arms with clubs, teargas them, push them into razor wire — these are the stories I’ve heard.

The fact I wanted to add is this: There are currently 55,000 refugees registered in Greece, waiting to leave or declare asylum. In Macedonia, there are about 350. If the country wanted to rid itself of Syrians, Afghanis, and Iraqis overnight, then it succeeded.

I found this on TheNewsThatMoves.org:

Approximately 350 refugees are currently waiting in camps in FYROM [Macedonia]. However on Friday June 3, information from the Center revealed there were 520 people present in the two camps, indicating the number of refugees in the camps in FYROM decreased by 170 in just five days…

There are currently two hundred people at the reception camp in Tabanovce, near the FYROM-Serbia border, and another 140 people are in Gevgelija, near the FYROM-Greece border. Nineteen asylum seekers were transferred to the Asylum Center in Vizbegovo, in Skopje, after they applied for asylum in the camps.

New routes are emerging. I’ve heard from refugees and volunteers that people are starting to curve eastward into Bulgaria on their way toward Serbia, whose borders remain open.

Yet there are still thousands of refugees posted at camps near the Macedonian border who are stuck in a routine: cut a whole in the fence, walk for hours or for days until the police find you and send you back to Greece. That’s basically what the unofficial camp at Idomeni was about. It was a place to recover from the last trip north and plan for the next.

I heard about a family that walked for two days without water until they were caught. I talked to a woman today who crossed into Macedonia ten times in 30 days, always sent back. I met a guy in Polykastro, Greece, who had crossed perhaps twenty times. “Tell him how many times,” laughed his friend. “I can’t remember,” he said. They both laughed some more. “Every time, bam, bam, bam!” he said, miming a cop swinging a nightstick. I thought it was funny, too. One big adventure. Young heros scramblimg up mountains, hiking toward a promised land with their buddies.

Then I found out that Ali’s crooked arm, shorter than the other and with an inward-facing elbow, was not a birth defect. A Macedonian border guard had smashed it with his bat, and the Greek doctor refused to set it.

(The video above, given to me by they one holding the camera, was filmed in the hills of Macedonia, during an attempted crossing. They were later caught and sent back to Greece.)

Me, I said farewell to Greece and slipped into my alternate universe, slid my American passport into the customs window of Narnia and left the world of Idomeni and Hotel Hara behind.

In Skopje I tried to visit the official refugee center where fewer than 100 people live, perhaps even fewer than 20. I don’t know because nobody would talk to me. What is the function of this place? I asked the receptionist.

“I’m sorry,” he said. “You’ll have to get permission from the Ministry of Labor to visit.”

“But I don’t need to visit. I just want to know what goes on here. Is it just a residence? Are there lawyers? Activities?”

Finally, he gave me something.

I turned and saw the most bummed-out guy I’ve ever seen. He had long brown hair, and he looked like he hadn’t slept since March.

“Are you seeking asylum here in Macedonia?”

I went outside and conspired with my translator/driver, who was, in fact, also my host. He and his wife and two kids had picked me up at a gas station near the border and had taken me all the way to Skopje. Now I was staying at their house, and the guy was driving me around and translating for me. I still can’t believe how helpful they were. 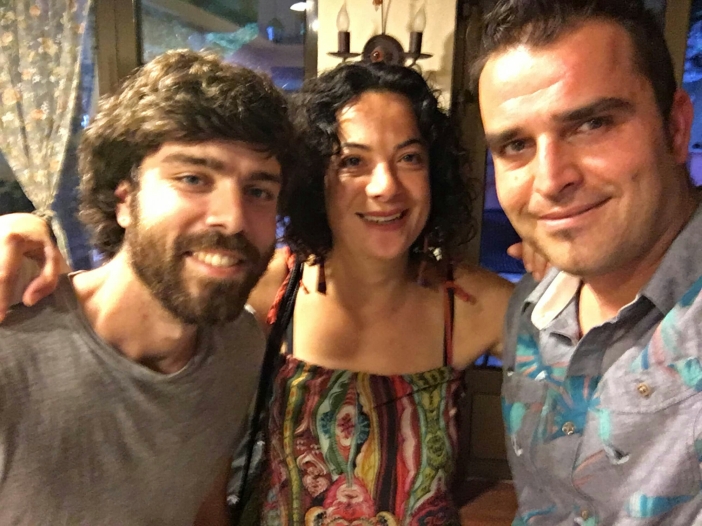 They told me they’d tried to pick up refugees before, but the refugees explained to them that it was a crime to drive them. Human trafficking. “We said, don’t worry, we’ll just say we didn’t know.” But the people refused to get in. They knew the Macedonian police better than that.

So he and I conspired and decided to give up. We drove around once more to have a look at the facility from the outside — looked like a mix between a motel and public housing — and then took off.

And one last thing about Skopje, which has more to do with the country’s closed borders than first meets the eye. The capital city’s nationalist government has, over the past five years, spent an ungodly amount of money erecting monuments to an invented history. There is more than one statue of Alexander the Great who has arguably no ties to the tiny Slavic country. They built a giant sea-faring ship in the river, miles and miles from any sea. If you rap on the outside of the statues you can hear a tinny echo, and if you rub your hand over the faux-marble buildings, you notice that it’s just concrete poured into slabs and swirled around. 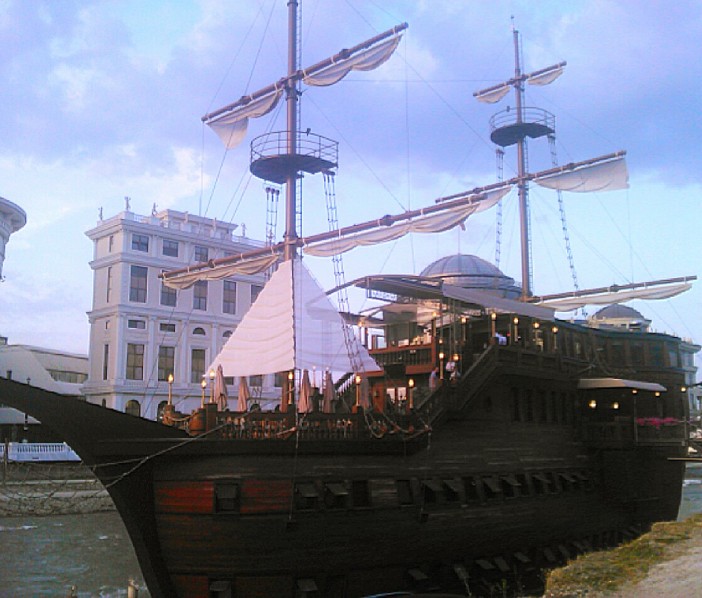 It’s embarrassing for Macedonian’s citizens who are attached to reality. “Students live in this,” said the mother of the family as we were driving into town. She gestured at a high-rise with busted-out windows  and inhabited windows alternating in a checkered pattern. “Students live in this and they build million-dollar monuments. They’ve ruined the city. I still can’t believe it.”

It’s just classic nationalism, though. Invent an ethnic history in five years, kick out the scapegoats, and close the borders.

Skopjans are resting. They’ve been stalking the streets in mass protests, throwing paint bombs at the monuments, and calling it the “Colorful Revolution.” 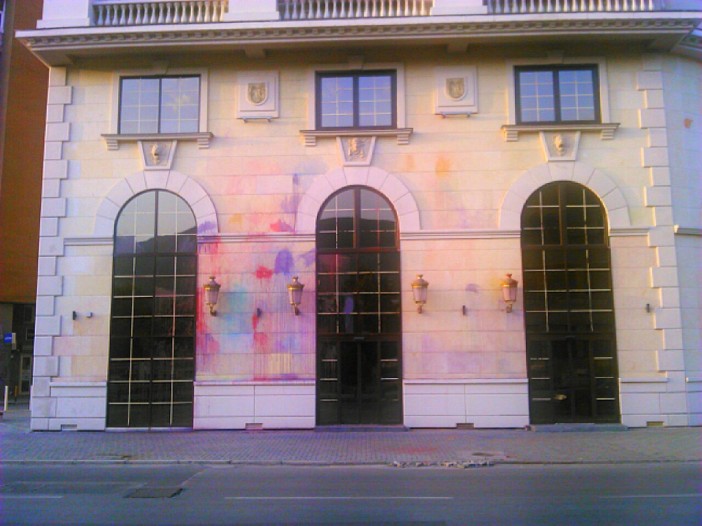