In June, I hitchhiked from Athens to Berlin to write about the Balkan Route — the route that saw hundreds of thousands of refugees traveling north last year, but which this year has been progressively blockaded by militarized police and razor-wire border fences. My last post was about the “transit zone” between the Serbian and the Hungarian fences. Because undocumented migrants can leave Serbia but cannot enter Hungary, they have been stopped in this non-place where they have erected a small, destitute camp. I visited the crossing at Kelebjia, Serbia, but there was another camp several kilometers east at Horgos.

I asked people there why they sleep inside of the transit zone without showers, without running water, sometimes without a tent, and the answer always referenced “the list” — a rolling register that migrants could put their name on and hope for admittance into Hungary, which takes in only 10 to 20 asylum seekers daily. How exactly this list worked and why you had to be inside the transit zone to remain eligible was never explained to me. Neither the residents nor the aid workers knew the details, and I began to doubt that the Hungarian government knew either. Everyone played their own role intuitively, it seemed, and yet no one knew what the hell was going on.

I heard her speaking English, which made it easier for me to introduce myself. Her name was Ruby, she was from Cuba and she was hoping to reach Spain, where much of her family lives. She’d first flown to Moscow and then to Montenegro because Cubans don’t need a visa to visit either country. From Montenegro, she’d crossed into Serbia, because Serbia’s borders are open.

I don’t know how else to say it: Ruby doesn’t look like the other women at the camp. Tall, Afro-Carribean, dressed in pre-torn jeans and Mini Mouse tank top, she draws long silent stares every now and then from the others waiting around the little fruit stand near the border.

“It’s awful here,” she said, glancing repugnantly at the giant brown puddles stretched across the gravel road where the aid workers’ vehicles park. Lunch distribution was over, but another van had pulled up and a young man emerged with a box of stainless steel nail clippers. He handed out about fifteen of them, and the simultaneous clipping sounded like grasshoppers at high noon.

Ruby had arrived 20 days ago at the transit zone, she’d put her name on the list, and now she was waiting. Other people who had arrived after her had already been called on and were gone into Hungary. She didn’t know why she was still waiting, but she thought it was because she is a Cuban asylum-seeker and not Syrian or Afghani.

The amenities inside the transit zone camp — if you can even call them amenities — are austere. No showers, fewer tents than people, very little shade, nothing but the dirt to sit on. But, for Ruby, the primitive camping has a second dimension of brutality. The men and the other women residents wash themselves from buckets in semi-privacy near the camp. Ruby attracts too much attention to abide semi-privacy. She has tried to walk deeper into the woods to wash up and men have followed her in there “to look at me,” she said. Once, in camp, an older man told her he knew a place where she could shower in private. She was surprised at the generous offer and followed him into a tent, where, once inside, he put his hands on her. She ran out. 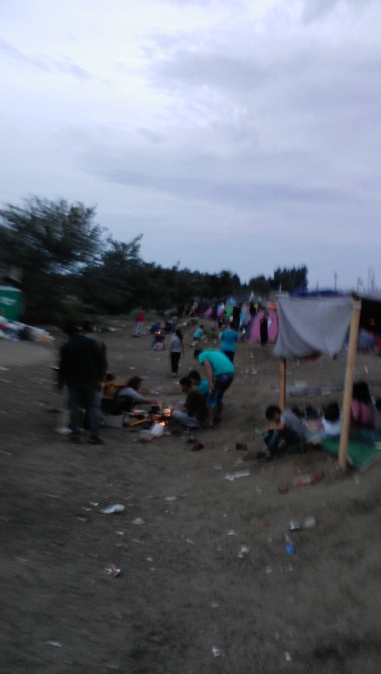 She’s alone, but not totally alone. She met another Cuban named Joe en route to Kelebjia and they became travel companions. He’s someone to talk to, they joke around in Spanish, make arrangements to go into town, to watch each other’s things. And when Joe is with her, the men in the camp leave Ruby alone. When he’s not there, she usually stays in her tent most of the day.

I hung around the fruit stand for several hours watching aid vans come and go, children chasing each other around the gravel, young men negotiating for a socket at the phone charger hung up at a kiosk near the fruit stand.

Later in the day Ruby and Joe fell into a serious discussion. Another camper in the transit zone, an Iranian man, was also involved. They spoke to each other in English, but I didn’t eavesdrop. Later I asked Ruby what was up.

“They want to go with the mafia,” said Ruby, indicating Joe and the Iranian. The “mafia” is how asylum seekers refer to smugglers who charge money to take them across borders.

“I’m scared. Joe goes, he ask if I want to come. But I don’t trust the mafia.” She stared at the ground for a while, biting her lip, arms crossed. “But if he leaves, I’m alone. So maybe I go. I don’t know.” She paused again. “It’s complicated. It’s so complicated.”

By the time I left, nothing had been decided. The question was put off for perhaps another day or two. I sat on the curb waiting for the bus back to Subotica and watched Ruby and Joe standing on a dry patch in the road between two puddles, singing in starts and spurts to piece together a Spanish song. When the tune came back to them in full, they laughed and joined hands, began dancing the salsa. Their dance was short, not long enough for me to dig out my camera and record it. Just long enough to put a looping scuff in the dirt.

For the past two weeks I have been traveling the Balkan Route, which migrants take to get from the port of Athens to points north. I’ve been meeting refugees and the people who help them. In this post, I visit a “transit zone” camp between Serbia and Hungary.

A closed border, all razor wire and gloom. And, running through the heart of it, is a road where every now and then a car rolls through, full of luggage and kids with their feet on the back of dad’s head-rest, and maybe one of them slowly turns their head to interpret what they’re seeing: Ragged tents with the poles pierced through shredded nylon; an old man shaving over a puddle; two kids running circles around a Red Cross van.

I had thought the mood would lighten the further north I traveled. I was now at the top of Serbia in Subotica, the last town before Hungary, and Hungary was the last barrier to the wealthy West: Austria, Germany, Sweden!

But that assumption left out an important point: Hungary knows this. Viktor Orban, the prime minister, has said candidly that he doesn’t want more Muslims in his country, and Hungary’s policy toward migrants has reflected that: They’ve reduced the number of asylum centers, given border police more power to “push” migrants back into Serbia. Even when asylum-seekers enter the country legally, Hungary detains them, sometimes for several months.

So the Serbian border has become a kind of trench where people walk around biting their nails, making small talk, taking showers, preparing for the next step.

When I arrived, I had no contacts. I’d tried asking around in Belgrade for a phone number or even a name, but border volunteers shift from place to place and are difficult to get in touch with. Besides, the word among volunteers in Belgrade is that there’s nothing for the public to see. Neither journalists nor aid workers can get into the camps at the border without permission from some minister or other. At first I didn’t understand this. The Serbia-Hungary border has unofficial camps as well as official ones, and I couldn’t imagine who could stop civilians from getting into an unofficial camp. It’s just tents in a field, after all.

That’s because I didn’t understand the “transit zone.” People had tried to explain it to me. I knew what it was in theory, but I didn’t believe it until I saw it.